Here’s a look at a piece that will not ever be one of our offerings, a demitasse cup and saucer that aesthetic collectors will recognize as the familiar “Melbourne” pattern. It did not quite escape the danger of sale-by-auction and came to us with a saucer in need of a bit of attention. It was on its way to that storage area we sometimes affectionately call “Crack Land,” but we were stopped by a look at the cup.

Instead of the plain border treatment of its fellow “Melbourne” demi’s, this little guy wore a bit of the elaborate pattern usually found on the plate—a strong diagonal intersected by a dramatic stand of bamboo.

A second look amazed us. The transfer tissue with the bamboo had been folded over the edge of the cup creating a spray of foliage in the interior. We had never seen a transfer image manipulated in this way. Besides that, a few birds had been trimmed  from the flock that hovers over Melbourne’s tropical scene and now fluttered inside the cup as well.

Now we frequently point out that the goal of the transfer printing was to ensure the uniform quality of goods manufactured in quantity. How do we explain this fluke? Was this some sort of design experiment?

Given the spontaneous way the tissue was applied, we prefer the fantasy we have conjured up. Perhaps some decorator had the opportunity—maybe “on the sly”—to play around with scraps of transfer tissue: “What if I do this…?” In our fantasy the decorator may have managed to keep the cup and saucer.

Of course, if we hear that one of you has a whole set of these demi’s, our fantasy is blown. Nevertheless, we like to think we have a tiny human legacy from the industrial revolution—a personal glimpse of one worker on the line--like the finger prints of potters occasionally found on the surface of stoneware.  In short, no residence in Crack Land for this new treasure.

While we won't be offering this demitasse set--damaged, after all--there are some fine examples of the Gildea & Walker pattern currently available on the Seekers website. Click the image for details.

Finally, should you want a little general background and discussion on this south seas fantasy, we have re-posted an earlier Featured Item on the "Melbourne" pattern -- click "next" below.

As we in the Midwest find ourselves in the midst of a season of gray days, snow, ice and cold, we thought an excursion into the world of Aesthetic transfer could provide a bit of diversion for our March listing ---- and where better to start this journey than Gildea & Walker's "Melbourne"pattern. 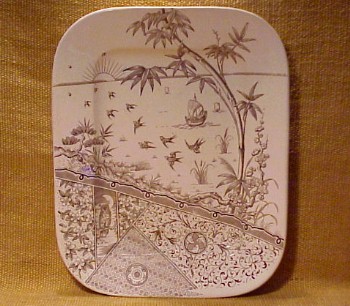 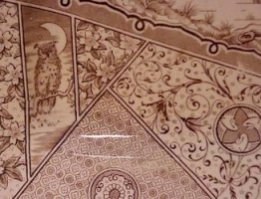 Among Seekers various offerings, the current "hot item" is Aesthetic transfer.  Gildea & Walker's "Melbourne" is one of the most recognizable patterns of this genre.  "Melbourne" is an assymetrical arrangement of an idyllic tropical vista with a slash of exotic patchwork cutting across the bottom. This field mostly resembles a collection of fabric scraps randomly sewn together, similar to the exotic silk and velvet crazy quilts of the day. However, as with the quilts, closer examination will reveal a few little treasures worked in among the scrapwork.  Each example includes a circular "mon" (based on the exotic Japanese heraldic crests that had just invaded popular product design) and a mysterious panel featuring a bird set against a sunlit or moonlit sky. 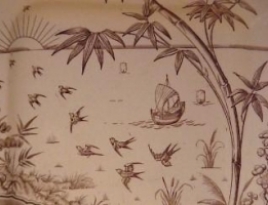 Melbourne" is a defining example of Aesthetic transferware design in contrast to the older historic or romantic patterns.   In Melbourne, each section or element is treated as a separate component which combines with the other sections to create an arrangement.  Previously, transfer designs were typically pictorial compositions framed by a border--the various rules of perspective and scale observed accordingly.  Patterns like "Melbourne turn to oriental print and textile sources for artistic direction.  Note how the primary landscape panel shows no western sense of perspective, instead exhibiting a bizarre sense of scale and a high, disant horizon line. 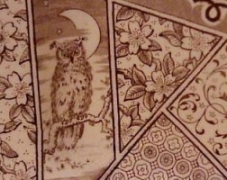 We do not know how conscious today's Aesthetic collectors are of these differences.  The new Aesthetic collectors tend to be modern and young (or at least young at heart) and intent upon collecting usable goods.  For these new collectors, traditional transferware designs may seem as overly busy as they did to the aesthete consumers of the eighteen-eighties. The clean lines and durable ivory body of "Melbourne" seems to have been made for them.  Of course, as we talk about the new collectors, we must give tribute to that arbiter of taste and lifestyle, Martha Stewart.  We are told that Martha Stewart's Living included an article on "Melbourne" some time back indicating it as one of Martha's favorites. Those of us obsessed with china have not missed glimpses of aesthetic transfer and "Melbourne" in particular in the background of Martha's various kitchen segments. 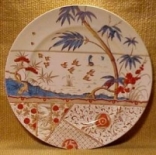 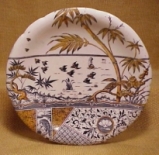 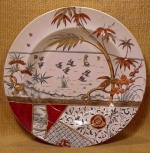 Like other potters of the period Gildea and Walker extended the variety offered in the "Melbourne pattern by adding various combinations of enamel and lustre details. Seekers currently offers three additional variants: brown transfer plates highlighted in deep red and teal blue enamels. a black transfer compote highlighted in ochre lustre, and a black transfer soup plate highlighted in a rust red enamel with caramel lustre.  We know of other enamel variations including one in which the sea is depicted with a dramatic swath of brilliant cobalt with gilt details. (Sorry, but that one has hung on our kitchen wall for years.)

Gildea and Walker's introduction of "Melbourne" in 1881 evidently set a trend in the world of Aesthetic transfer.  Their south seas paradise/patchwork field format was widely copied.   Familiar examples include Edge Malkin's "Tonquin" (registered 1883, also available through Seekers) and W. H. Grindley's "Burmah" (registered 1883).  Less common patterns include James Gildea's "Crusoe" (registered 1886), Willets "Tropics" (registered 1883) and a raft of others.  Consideration of registry dates indicate it was Gildea & Walker's "Melbourne" which initiated the look.

What is it about that look that--for all its quirky eccentricity--appeals to collectors nearly one hundred and twenty year's later? Maybe it is the universal appeal of the seashore. Or perhaps by turning their backs so defiantly on the European tradition of tableware design, the creators of "Melborne" hit upon a combination of imagery and style that fits into contemporary eclectic interiors as well today as it did in the 1880's.  Or maybe they touched upon a vein of whimsy that simply does not go out of date.

--And a little whimsy may be a good thing for the gray days of March. 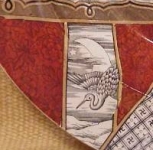 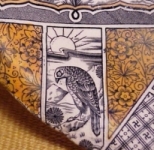 (References on Aesthetic transfer are somewhat sparse currently.  For this entry, we referred to the Wadsworth Atheneum exhibition catalog, The Japan Idea, Art and Life in Victorian America by William Hosley, 1990.  Thanks must also go to our good friend and fellow collector, Stephen McMaster of Richmond, Virginia who first pointed out the concentration of registry dates for "Melbourne" and the associated patterns.).